Himachal Pradesh truly represents the term “unity in diversity”. As you travel within Himachal you will notice that the people and the culture inhabiting the region changes with the topography. There are at present 15 different tribes residing in Himachal and each of them has something unique to offer to the world. The Himachal Tribal Tour Circuit is quite famous and offers a lot of insight into the colorful lives of the Himachali tribes.

Kinnaur are tribes who live in the borders of the valley of Kinnaur. Some of these tribes believe that they are associated with the Kinner tribes of Maharashtra while other strains believe that their ancestors are related to Kirats who were outnumbered and overpowered by Aryans when they invaded the valley. Most Kinnaures are tall and fair and have Aryan features but some have mixed Mongolic strains too. This is very peace loving tribes who is soft spoken and is mainly engaged in horticulture and agriculture. 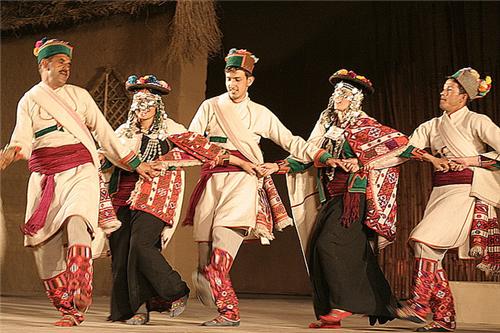 Chubha and Chama Sutan are the traditional garments which are worn by Kinnaures. They wear shoes made of wool and goat hair.

The unique aspect about Kinnaur culture is that their marriage system follows the Pandava-Draupadi system. All brothers in one family choose and marry a single girl. Naturally many girls are left unmarried and so they convert into nuns.

Gaddi Tribes of Mandi and Bilaspur

Gaddis are not nomads as they have fixed villages where they reside. Like migratory birds they too migrate to warmer pastures in winter and cooler pastures in summer. The Gaddis originate from the nomadic tribes of the plains. It was believed that Aurangzeb the Mughal dictator forced them to flee from the plains.

The Gaddis are a good looking tribe with clear complexion and attractive features. However the most attractive aspect about them is their colorful dresses and gorgeous scarves which the tribeswomen weave themselves. The black embroidered sash on their back is used to carry infants in a safe way. Gaddi style tribal jewelry studded with semi precious stones and sparkling mirrors is very famous. The primary occupation of the Gaddi tribe is shepherding, weaving and farming.

The Gaddi tribe is flamboyant and decorate themselves with peacock feathers. By values and morals they are quite conservative and follow a disciplined life.

Gujjars are mostly Muslim and their origin is believed to be central Asia. Historians believe that Gujjars have part Hindu and part Muslim ethnicity as lots of inter marriages have happened with other tribes. This tribe is strictly vegetarian and they prepare amazingly delicious food flavored with herbs and flowers picked from the nearby valleys and lowlands.

Gujjar community is nomadic and they are shepherds and goatherds by occupation. They keep migrating to different and more fertile regions of the Trans Himalayan region.

The citizens of Lahaul are called Lahauli and they are mostly tribals. These tribals originated from Munda and they are intermixed with Tibetans. Lahaule tribes have longish fair faces with Tibetan features. The class system is prevalent here and the Lahaulis divide themselves into upper and lower classes. Their preferred religion is Buddhism and in the hut of every Lahauli there is a picture of Gautama Buddha.

The socio cultural norms of Lahaulis are extremely liberal. Women (and men) can marry multiple times and divorce rate is also very high. The only rule that they follow is that they always marry within the tribe.

The Lahauli tribes are mostly engaged in trading, shepherding, agriculture. One of the pathways of the famous silk route extended from Ladakh to Srikhang and the Lahauli tribes were engaged in trading activities since a long time. They are generally able to sell saffron, spices, animal hide (though this is now banned), hand spun silk, minerals like shilajit, gold and silver jewelry etc to tourists at highly discounted prices.

Pirals are nomadic tribes who have cultures and customs that are very similar to Hindus. They are mostly involved in tending goats and animal husbandry activities. During the winter season the Pirals along with goat herds descend to the warmer lower climes of Kangra and the lush green forests of Hoshiarpur. In summers the Pirals put up nomadic tents on the banks of Chandrabhaga River in Lahaul.

The Piral community is very friendly and fun loving and you can easily relate to their rituals when you visit them.

If you very interested in human history, sociology or anthropology then you can opt for a full fledged 10 day tribal tour that focuses on the lives of most tribes staying in Himachal exclusively. Otherwise a 3 day or a 4 day tour can be organized to offer you insight into the selected tribal communities of Himachal Pradesh.

Keylong to Udaipur to Triloknath to Kardang to Gondia to Keylong

Day 1: Travel from Chadigarh or Delhi to Khajiar and then stay at Kalatop Forest Rest house
Day 2: Travel from Khajjiar to Tissa and then to Bairagagarh and then travel to remote Killar through the famous Sach Pass. Overnight stay at Killar Guest House
Day 3: Killar to Udaiput to Sissu to Khoskhar with overnight stay at Khoskhar Guest House
Day 4: Khoskhar to Chatru to Chandrataal and then camping besides beautiful Chandrataal Lake
Day 5: Chandrataal to Losar via Kumzum Pass and then to Kaza and Tabo with night say at Kungri Guest House
Day 6: Tabo to Kalpa with sightseeing and stay
Day 7: Kalpa to Narkanda with sightseeing and stay
Day 8: Narkanda to Shimla or Home Destination

Taking the Tribal tour will open your eyes to the exotic beauty and the richness of culture of Northern India. The beautiful handicrafts, unusual dresses and interesting customs of the Himachali tribes will amaze you while their simplicity will touch your heart.