* In case of any delay in receiving the OTP, you may verify it later. Please proceed without verification.

Architecture of Temples in Himachal Pradesh

Architecture of Temples in Himachal Pradesh

Generally whenever temples of India are discussed, the first name which comes on the lips of the average tourist is South India. The temples of South have hogged the limelight for long but unless you came and visit the Himachal Pradesh temples you will have no idea of the architectural diversity here. Right from the graceful Shikhar to the Buddhist inspired Pagoda to the rare Satluj Valley styles; there is an abundance of motifs and designs used in the designing of these temples. Here are some interesting facts about a few prominent temple architectural styles and their significance in Himachal. 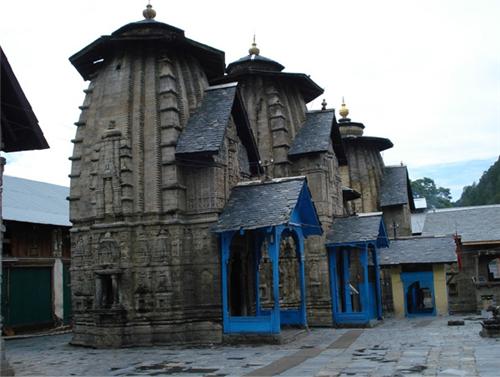 Shikhar Temples are long conical structures that are built with natural loam and stone and the outer walls are filled with intricate carvings. These temples have a round sun disc built at the top of the structures and this is also called amalaka. The other important elements of these temples are Mandap, Shikhar and Garba Griha or the Porch, Sanctum Sancrotum and the tower. Sometimes the Shikhar style of Himachal has been deeply influenced by the Gupta Rock cut classical temple style. Thakurwada temples in Masrur Kangra have some temples which are believed to be the earliest specimens of Shikhar architecture in Himachal Pradesh.

In Kangra there is the Lord Vaidyanath Temple situated in Bajinath and it is a fine example of the Shikhara style of architecture. Another good example is the Luxmi Narayan Group of Temples located in Chamba. Temples of Bajuara are also exquisitely beautiful examples of the Shikhar style

The delicate pagoda like design of the Satluj Valley architecture is only restricted to the beautiful land of Himachal and some parts of Kashmir. This is one of the rarest architectural styles of India. There is one or more pagoda like structures constructed over the garba griha in the temples. The structure is similar in positioning like the shikhar in the Shikhar style of temple architecture. The Shikhar is sometimes at the end of the building and sometimes in the middle of it. The roof on the other hand slants gently and has a slight concavity. All together the effect is very picturesque and its beauty makes it blend beautifully amidst the evergreen foliage of Himachal. 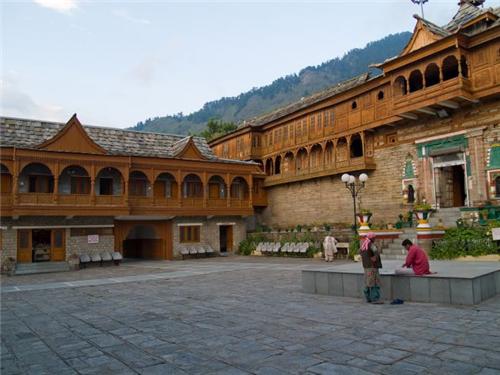 In Sarahan there is the famous Bhimkali Temple which is a fine example of this type of architecture.

Traditionally Himachal Pradesh temples were formed with conical or flattened roofs. The Dome style of architecture is the newest addition to the portfolio of temples in Himachal. Some domes are flattened like the dome of Brajeshwari Temple in Kangra and the Jwalamukhi Devi Temple in Kangra while others like Naina Devi Temple in Bilaspur has a round dome on top. All these temples were designed by locals under the patronage of presiding regional rulers. Thus it can be safely said that the dome style of architecture is a relatively newer trend.

The Pagoda style is obviously influenced by Buddhist Gompas and Chinese Pagodas. From a distance you might mistake a Pagoda style temple to be a Buddhist/Tibetan/Chinese religious structure. There are ever diminishing (in size) roofs that are stacked on top of the other with evenly distributed gaps. Either the roofs are squarish or they are round. The round freestanding Pagoda style is very common and is seen in many places in Kullu Manali. 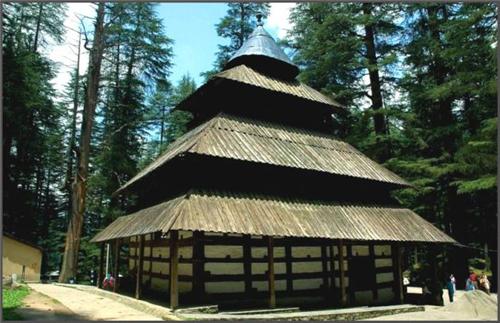 The primary examples are the famous Hadimba Temple (built by Raja Bahadur Singh in 1553 )in Manali and the Adi Brahma Temple in Kullu along with the magnificent Tripura Sundari temple in Naggar. These temples do not have an adjoining structure besides the main building which is why they are called Free Standing styled temples.  The free standing Pagoda style came to India from Nepal.

Flat Roofed temples in accordance to their name have completely flat roof bereft of any type of shikhar or Dome. These temples and this particular style of architecture are quite rare and are not found in areas outside Kangra and Hamirpur.

The areas of Kangra and Hamirpur seem to have a penchant for the flat architectural style as most monasteries here are also flat roofed. A few examples of flat roofed temples are Narbadeshwar temple at Ajujanpur near Hamirpur and the Ramgopal Temple at Kangra.

This is the most common style of architecture practiced in Himachal. The luxuriant frosts in Himachal are full of high quality Timber. This is why Timber wood is used extensively in making temples, buildings and palaces in Himachal Pradesh. Local communities in Himachal Pradesh have always preferred using dark polished Timber for making small temples which are dedicated to the Pahari Gods and Goddesses. The Bijli Mahadev temple in Manali and the Shakti Devi Temple in Chamba are good examples of the Timber Bonded style with a pent roof. Some temples like Hatkoti Temple in Shimla and the Bharmour temple in Chamba have a verandah attached to the main temple building. 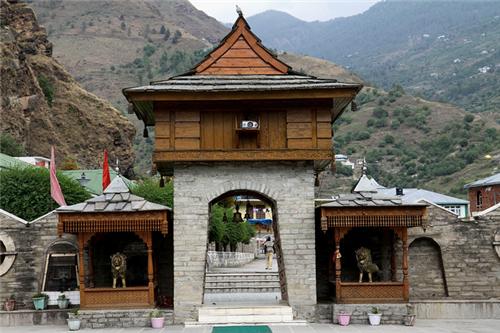 This type of architectural style is typical of hilly areas as the structures are well balanced and are not affected by landslides, strong winds and heavy snowfall. Pent Roofed temples are very ancient and some of the oldest specimens date back to the 7th Century. The famous Bijli Mahadev Temple in Manali which is considered to be very auspicious and potent also belongs to this category.

The Hateshwari Temple and the Maha Shiva Temple in Hatkoti are two examples of this kind of architecture. There are two more Shiva temples in Deora that are built in accordance to this style.

Comments / Discussion Board - Architecture of Temples in Himachal Pradesh